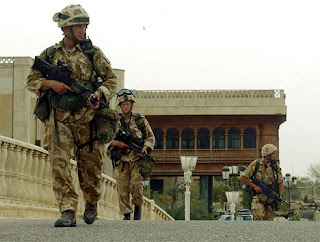 Barking mad this not least as 'military recruitment' does not happen in schools. Another point is all these delegates speak authoritatively about a military in which none at all have ever served. I guess their beef is with the govt but still attacking the soldiers themselves is easier. From the Daily Mail in this case:

http://www.dailymail.co.uk/pages/live/articles/news/news.html?in_article_id=533428&in_page_id=1770 Row as teachers call for ban on army 'pro-war propaganda' recruitment leaflets in schools By LAURA CLARK and MATTHEW HICKLEY - More by this author » Last updated at 00:46am on 14th March 2008 Comments (32) Military recruitment in schools should be banned as it exposes pupils to pro-war propaganda, teachers say. Left-wingers in the National Union of Teachers are attempting to galvanise a campaign to stop recruitment visits. Scroll down for more... Glamourized: The MoD have been accused of targeting yongsters by a teachers' unionDespite acute shortages of military manpower, the teachers will present a motion to the union's annual conference this month urging members to "actively oppose" recruitment activities in schools. The move, described as "deeply unpatriotic", will fuel growing concern over hostility displayed by parts of society towards the Armed Forces. The motion, scheduled for debate at the NUT conference in Manchester, condemns "the exploitation of schools for recruitment by the Armed Forces". It says: "Military intervention in schools customarily presents a partisan view of war, largely by ignoring its fatal realities in favour of promises of travel, skill training and further or higher education course sponsorships otherwise often unavailable to young people, especially in areas of high unemployment. "Conference believes that teachers and schools should not be conduits for either the dissemination of MoD propaganda or the recruitment of military personnel. "Conference therefore agrees to actively oppose military recruitment activities in schools." The Ministry of Defence has scaled back active recruitment in schools. But the three services still have teams which respond to invitations to visit schools, giving countless presentations. Tory MP Patrick Mercer, formerly a colonel in charge of Army recruitment, said: "The union's attitude leaves me breathless. It is deeply unpatriotic, and runs directly contrary to the commitment and bravery our servicemen and women are showing in service of their country. "Recruitment and retention have never been as difficult as they are now, and visiting schools to make young people aware of opportunities in the military is a key part of recruitment strategy." The union's leadership has already made clear it intends to get the section of the motion referring to visits removed. It said it opposed the attempt to stop recruitment activities and has put forward an amendment that would see it removed. However, the leadership is backing a second aspect of the motion, attacking the use of teaching materials produced by the MoD, and intended to increase awareness of Armed Forces activity, as "propaganda". NUT general secretary Steve Sinnott wrote to Ed Balls, the Schools Secretary, to complain about a lesson plan for English intended to help pupils learn the skill of "writing to argue". The plan focuses on "the ongoing occupation of Iraq by British Armed Forces". Mr Sinnott said: "I think it is propaganda. It does not present a balanced position." But the MoD said use of the resources was voluntary. "We have consulted widely with teachers and students during the development of these products and feedback from schools has been extremely encouraging." Critics of the motion said it was obvious that Armed Forces recruitment material would avoid drawing undue attention to the risk of loss of life attached to a forces role. What about the leftie NUT members with their propaganda? Something with their ten weeks paid holiday a year they have a lot of time for it seems.
Posted by Paul at 05:43 4 comments:

MPACUK is a British branch of the Islamic Muslim Public Affairs Committee. This organisation preaches non violent Jihad. They never really describe what their actual Jihad is but never mind that is another topic. The point here is that they along with other Islamic organisations are seeking to disingenuous exploit a racist murder in Denmark. See it here. I will also link to MPACUK on my blog.

The problem with this is that they are lying pure and simple and serving a very devious end. By seeking to place the blame for this crime on the recent reprinting of the Muhammad cartoons in Denmark; they are saying in effect 'look where the printing of the cartoons has led to'. In fact it was a racist murder, appalling yes but nothing to do with cartoons. In my opinion the cartoons like Wilders recent film should be published. Groups which represent religious communities should not seek to enforce censorship. Here is the article from MPACUK.


Thursday, 27 March 2008
var sburl6750 = window.location.href; var sbtitle6750 = document.title;
var sbtitle6750=encodeURIComponent("Danish Islamophobia Kills Muslim Teen"); var sburl6750=decodeURI("http://www.mpacuk.org/content/view/4498/"); sburl6750=sburl6750.replace(/amp;/g, "");sburl6750=encodeURIComponent(sburl6750);
COPENHAGEN — Danish Muslims link the racist murder of a Muslim teen last week to an increasing Islamophobic atmosphere fanned by the reprinting of a cartoon satirical of prophet Muhammad (peace and blessings be upon him). "Deniz Ozgur Uzun was killed because of his dark, Middle Eastern skin," Jihad Abdelalim Alfara, the chairman of the Islamic Council in Denmark, told IslamOnline.net.
Uzun, a 17-year-old Turk attending a technical high school, was distributing newspapers in the Amager district of Copenhagen Wednesday when he was verbally harassed by three Danes, aged 15, 17 and 18.
"They tried to provoke him with racist slur," said Abdel-Hamid Hamdi, head of the Shura Council of the Islamic Council in Denmark.
"He ignored them and went his way before they stopped their car and started assaulting him."
A friend of Uzun, identified by the media as Mohammed, said the three attacked Uzun with a baseball bat and a hammer, leaving him unconscious.
The Muslim teen was put on life support at a hospital in Copenhagen with "severe brain damage" before he was pronounced dead the next day.
The three attackers were captured shortly after the attack and are still in custody.
"These three racist Danes were being sought even before attacking my son," Ali, the father, told local media.
"How could this happen?"
The Copenhagen Police Department confirmed that one the attackers had been captured with a gun six days before the attack and that the three are known to have criminal records.
Cartoon Effect
Alfara, the Muslim community leader, believes the racist attack is directly linked to an Islamophobic atmosphere in the Scandinavian country fanned by the recent reprinting of the prophet cartoon.
"Was it necessary to have someone killed for people to realize that racism is on the rise in Denmark following the cartoon crisis."
Denmark's main dailies reprinted on Wednesday, February 13, a drawing of a man described as the prophet with a ticking bomb in his turban.
The move has reignited a controversy that first surfaced in 2005 after the mass-circulation Jyllands-Posten commissioned and printed 12 cartoons of the prophet, sending thousands of protesting Muslims into the streets across the world.
For some Muslims the incident unmasked double-standards in dealing with the country's nearly 200,000-strong minority.
"Where are those politicians who always jump on the bandwagon whenever Arabs or Muslims are involved in any similar incident," asked Hamdi.
"Why have not we heard from Justice Minister Lene Espersen who champions more restrictions on Muslims, imams and minority leaders?
"Where is the leader of the right-wing Danish People's Party Pia Kjaersgaard to explain why three blonde-haired Danish teens committed this racist crime?"
Posted by Paul at 04:35 No comments:

This is my first ever post and the first time I have ever blogged. A big hello to everyone. I will follow this up with news and comment. Like in the image I will occasionally make waves I hope. All the best. Paul.
Posted by Paul at 06:54 No comments: