A new Aim for our Coalition- Repeal the hand guns ban of 1997. The facts are Liberal Firearms law = Less Crime 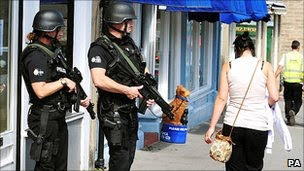 
This I accept to many (usually the ill-informed) is a strange subject to blog on. Namely the very important need as I see it to liberalise Britain’s gun laws. Why you may think as well as shudder and regard the issue as well as the author as crazy. In fact in British culture in general people who like guns or want to keep them are often regarded as being a bit loopy. But for me the issue is simple. A law abiding citizen should be allowed to own firearms, further more they should be allowed to use them in self defence of their property until the police eventually arrive.

Also did you know that gun crime has increased fourfold since the 1998 ban on handguns was introduced? Did you also know that countries with more liberal gun laws such as Switzerland and Israel have a fraction of our crime? Finally when someone attacks your property, what is your sole choice in the UK? You guessed it to be a victim of crime? That is all. I am calling for as a minimum, the hand guns ban of 1997 to be repealed. The law that exists in Northern Ireland and the Channel Islands should be the norm. Finally I will show below the article from BBC online in which the American academic Joyce Malcolm provides her view. My view is that HMG should be willing to trust its citizens to be armed, otherwise why should we trust HMG? Please debate this issue in the comments I warmly welcome contributions from the US and those opposed to my view below. Onto Joyce Malcolm:

Yet what we need is more guns, not fewer, says a US academic.
"If guns are outlawed," an American bumper sticker warns, "only outlaws will have guns." With gun crime in Britain soaring in the face of the strictest gun control laws of any democracy, the UK seems about to prove that warning prophetic.

For 80 years the safety of the British people has been staked on the premise that fewer private guns means less crime, indeed that any weapons in the hands of men and women, however law-abiding, pose a danger.
JOYCE L MALCOLM
Professor of history, Bentley College, US
Author of Guns & Violence: the English Experience
Senior Advisor, MIT Security Studies Program
Click here to have you say on this story
Government assured Britons they needed no weapons, society would protect them. If that were so in 1920 when the first firearms restrictions were passed, or in 1953 when Britons were forbidden to carry any article for their protection, it no longer is.
The failure of this general disarmament to stem, or even slow, armed and violent crime could not be more blatant. According to a recent UN study, England and Wales have the highest crime rate and worst record for "very serious" offences of the 18 industrial countries surveyed.
But would allowing law-abiding people to "have arms for their defence", as the 1689 English Bill of Rights promised, increase violence? Would Britain be following America's bad example?


Old stereotypes die hard and the vision of Britain as a peaceable kingdom, America as "the wild west culture on the other side of the Atlantic" is out of date. It is true that in contrast to Britain's tight gun restrictions, half of American households have firearms, and 33 states now permit law-abiding citizens to carry concealed weapons.
But despite, or because, of this, violent crime in America has been plummeting for 10 consecutive years, even as British violence has been rising. By 1995 English rates of violent crime were already far higher than America's for every major violent crime except murder and rape.
You are now six times more likely to be mugged in London than New York. Why? Because as common law appreciated, not only does an armed individual have the ability to protect himself or herself but criminals are less likely to attack them. They help keep the peace. A study found American burglars fear armed home-owners more than the police. As a result burglaries are much rarer and only 13% occur when people are at home, in contrast to 53% in England.


Much is made of the higher American rate for murder. That is true and has been for some time. But as the Office of Health Economics in London found, not weapons availability, but "particular cultural factors" are to blame.

A study comparing New York and London over 200 years found the New York homicide rate consistently five times the London rate, although for most of that period residents of both cities had unrestricted access to firearms.

When guns were available in England they were seldom used in crime. A government study for 1890-1892 found an average of one handgun homicide a year in a population of 30 million. But murder rates for both countries are now changing. In 1981 the American rate was 8.7 times the English rate, in 1995 it was 5.7 times the English rate, and by last year it was 3.5 times. With American rates described as "in startling free-fall" and British rates as of October 2002 the highest for 100 years the two are on a path to converge.

The price of British government insistence upon a monopoly of force comes at a high social cost.
First, it is unrealistic. No police force, however large, can protect everyone. Further, hundreds of thousands of police hours are spent monitoring firearms restrictions, rather than patrolling the streets. And changes in the law of self-defence have left ordinary people at the mercy of thugs.
According to Glanville Williams in his Textbook of Criminal Law, self-defence is "now stated in such mitigated terms as to cast doubt on whether it still forms part of the law".
Nearly a century before that American bumper sticker was slapped on the first bumper, the great English jurist, AV Dicey cautioned: "Discourage self-help, and loyal subjects become the slaves of ruffians." He knew public safety is not enhanced by depriving people of their right to personal safety.

Joyce Lee Malcolm, professor of history, is author of Guns and Violence: The English Experience, published in June 2002.
Posted by Paul at 10:04 3 comments: