This is a great little slot on BBC Radio Four, it consists of an interview with a former sports shooter from Shropshire.  The man provides an excellent critique of the ridiculous, dangerous and authoritarian laws we have been left with in England and Wales concerning guns. His pain when he describes how he had to hand in his firearms post the 1997 is particularly heartfelt, link is here please listen to this programme.  The only thing I would have added is it needs to be stressed how gun crime in Britain increased AFTER the handgun ban of 1997. P.S I'm dying for some pro-gun control authoritarian type to come on here and dispute my arguments it has never happened. Please comment below. 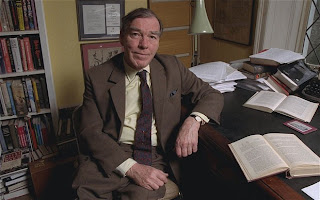 Sad to hear that the great military historian Sir John Keegan has passed away. I strongly recommend his work on Normandy in particular.  Full text from the DT below written by General Sir David Richards:


As a professor at the Royal Military Academy, Sandhurst, Sir John Keegan shaped a generation of young Army officers with his intellectual insights and historical perspective. As defence editor of The Daily Telegraph, he kept the generals and politicians in line with trenchant criticism and carefully judged observations. His death marks a sad moment for those of us who knew him, but an opportunity to remember a man whose influence on British defence policy was long and measured.
Sir John’s works unfailingly took the part of the soldier in battle, bringing a perspective so often overlooked by those with a more political interest. Those of us who were commissioned in the Seventies remember well his first major work, The Face of Battle (1976), which brought the perspective of the archer at Agincourt, the rifleman at Waterloo and the Tommy at the Somme to young officers preparing for what could have been the next European war. It was sobering for those of us who had not experienced battle and it played a major part in our training.
His later works built on this formidable tome and he shaped the way we thought about battle and the nature of military power. His contribution to explaining the Falklands conflict to a dubious and often defeatist London journalistic community should not be underestimated.
Victory in no way seemed assured and many thought the idea of sending a Task Force was a vainglorious relic of empire. Sir John saw it for what it was: a courageous, risky, but ultimately achievable operation that had to succeed, and he devoted a huge amount of effort to convincing others of this. It helped turn the doubting intellectual milieu into a supportive community.
That ability to shape the debate by bringing specialist knowledge to the lay reader was fundamental to his success. As conscription ended and fewer people had direct experience of military life, it was vital to ensuring that people understood what the Armed Forces were for.

This sometimes meant that he took on contentious topics, such as his support for the Iraq war. With courage and accuracy, he was able to divide the invasion from the occupation, and reminded everyone who would listen that in strictly military terms the victory in 2003 was astonishing for its speed and completeness.

As his more than 20 years on the Telegraph demonstrate, Sir John’s articles and comments contributed to the national debate with an energy and understanding that few could match. Though his views were not always shared by those of us struggling to balance the competing pressures that modern generalship demands, he was an honest critic and had that most useful of all journalistic assets: an ability to make us think again.
His work at the Commonwealth War Graves Commission is also worth remembering. This is a hugely impressive organisation with a global mandate, and requires people with the vision, sensitivity and understanding of Sir John to ensure that it endures.
I know his contribution to that, and so many other walks of life, will be greatly missed. Despite a childhood sickness that prevented him from putting on a uniform, he was very much one of us.
General Sir David Richards is Chief of the Defence Staff