PM requested bomber 'sensitivity' - Thanks for that Gordy! 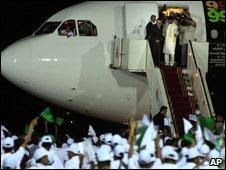 This from the BBC is a complete non-story. As we are all aware Megrahi has been released to jubilant scenes in Libya, his homeland. Fortunately the BBC are now telling us that PM Brown requested of the Libyans that they show 'sensitivity' upon Megrahi's return. Well assuming that's true thanks PM well done! Now will you actually tell us what you think about this decision to release Megrahi, the convicted Lockerbie bomber? Also will there be an inquiry to establish exactly what happened to Pan Am 103? Who was responsible and which terror supporting regime orchestrated this attack? I ask because almost 21 years later people do still not know the full story. Sadly I fear the truth will die with Megrahi. This is a unsatisfying end to a sad and sordid story. Full text below.
Prime Minister Gordon Brown had asked Libya to "act with sensitivity" in its welcome for the returning Lockerbie bomber, it has emerged. He sent a letter to Colonel Gaddafi ahead of Abdelbaset Ali al-Megrahi's release from Greenock Prison. Crowds in Tripoli, some waving Saltire flags, greeted the Libyan after he was freed on compassionate grounds.
Mr Brown has been urged by Tory leader David Cameron to make clear his view of the decision to release Megrahi. Downing Street confirmed the prime minister had asked Libya to show restraint on the return of the man convicted of killing 270 people in the 1988 atrocity. The celebratory welcome was subsequently described as "deeply distressing" by Foreign Secretary David Miliband.
It is curious that while others have commented, Britain's own prime minister has not said
David CameronConservative leader. Mr Brown has now been asked by Mr Cameron to state his opinion of the decision to release Megrahi on compassionate grounds. The Conservative leader has already said he believes Scottish Justice Secretary Kenny MacAskill was wrong to free the Libyan. In a letter to Mr Brown, he said the fact that the Scottish Government made the decision did not preclude the prime minister from making a comment.
He wrote: "It is curious that, while others have commented, Britain's own prime minister has not. "I hope you will now take the opportunity to do so. Above all, I believe the public are entitled to know what you think of the decision to release Megrahi, and whether you consider it was right or wrong."
Scotland's First Minister Alex Salmond said that the decision had been made "for the right reasons". The scenes which greeted the Lockerbie bomber's return have been widely criticised.
US President Barack Obama described the release as a "mistake" and said his administration had urged Libya not to give Megrahi a hero's welcome.
Scottish First Minister Alex Salmond also said the reception was "inappropriate".
Dumfries Labour MP Russell Brown and Dumfriesshire Conservative MP David Mundell described the scenes as "stomach turning" and "sickening". It has also emerged that a visit to Libya by the Duke of York is being reconsidered following the welcome reserved for Megrahi. The Duke's spokesman said a trip to Libya in early September had been "in its planning stages". Terminal cancer He added: "We will continue to take advice from the Foreign Office as we do with all overseas royal visits."
A Foreign Office spokeswoman said she was unable to confirm the visit would be cancelled because an official invitation to the British Government from Libya had not yet been received.
However, it is believed the visit by the Duke, who is understood to have made several trips to Libya in recent years, is unlikely to go ahead. Lockerbie bomber Megrahi, who has terminal prostate cancer, was released from jail on Thursday on compassionate grounds and flew back to Libya.
He was convicted in 2001 of carrying out the 1988 atrocity in which 270 people were killed.
He dropped his appeal against conviction earlier this week. Scottish prosecutors at the Crown Office have now confirmed they have also dropped an appeal against his "unduly lenient" sentence.