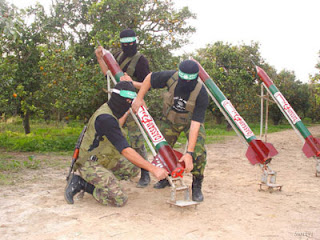 The IDF operations were targeting the indiscriminate launching of rockets into civilian areas by Hamas and other terror groups.

Happy new year folks, other bloggers have reviewed the year far better than I could so I shall just say good night to 2011 with this under-reported nugget of information concerning Israel's counter-terror operations.  This is from American thinker full text below, also check out Qassamcount for an online record of continuing indiscriminate terror attacks against civilians by Hamas/Islamic Jihad.  I'm off out now so happy new year folks!  This makes the 'we are all Hamas now' crowd look stupid but we already knew they are stupid.  From American thinker:


In a year-end review of countering rocket fire from Gaza, the IDF reports that its retaliatory fire killed 100 Palestinians, including nine civilians. The rest were combatants linked to Palestinian terror organizations. Put another way, the Palestinian fatality toll included 10 fighters for every civilian.The one-to-10 noncombatant-combatant fatality ratio is unique among conflicts around the world. No other army can boast of similar records of minimal civilian collateral damage. In fact, the United Nations estimates that 30 civilians are killed for every 10 combatant fatalities in conflicts elsewhere in the world. That's three times as many non-combatants as combatants.


The IDF's record is the more remarkable when one considers that Palestinian terror groups are deeply embedded in civilian neighborhoods, requiring ever greater IDF pinpoint accuracy in retaliatory strikes as well as extensive intelligence inside Gaza to select proper targets. Also, quite often, IDF commanders will forgo ordering an attack when the potential for civilian casualties seems too high.
Yet, if one reviews mainstream media reports in 2011 about the continuing Gaza conflict, scant attention is paid to the paucity of Palestinian civilian casualties. Headlines regularly announce that "Israel killed 3 Palestinians" -- leaving readers in the dark about who these casualties are or, worse, concluding erroneously that they're probably civilians. And virtually never do reporters dig into the lengths to which the Israeli military goes to spare civilians.


This remains most notable in coverage of Israel's counter-terrorism incursion into Gaza in the winter of 2008-2009. To this day, media like the New York Times, abetted by spurious reports from human rights organizations and the UN's notorious Goldstone report, still buy into Palestinian casualty figures hook, line and sinker, vastly exaggerating Palestinian civilian fatalities while overlooking hundreds of combatant fatalities.


These breakdowns, however, were mostly ignored by mainstream media, while overall casualty totals were vastly inflated by the Palestinian side and by self-appointed human-rights groups. And, more often than not, combatant-versus-noncombatants breakdowns never made it into print.
To this day, the New York Times, in referring to Israel's 2008-2009 Gaza offensive, simply mentions that 1,400 Palestinians were killed. Which falsely suggests that Israel used disproportionate force. A breakdown of civilians and non-civilians would throw light on what actually happened. But that king of reporting is not fit to print in the New York Times.
In similar vein, the UN's Goldstone report accepted largely pro-Palestinian statistics to buttress its gross libel that the IDF deliberately targeted civilians.


Ironically, Hamas -- long after the ground war was over -- accepted breakdowns much closer to the truth. Why? Because, on reflection, phony big numbers for civilian deaths and phony small numbers for combatant deaths were apt to minimize Hamas's "heroic" resistance against Israeli forces. So, Hamas belated announced that it had lost 600 to 700 of its fighters - a range quite close to the IDF's conclusions.
But this also is of little interest to Western reporters determined to martyrize Palestinians while maligning Israel and its military.
Leo Rennert is a former White House correspondent and Washington bureau chief of McClatchy Newspapers 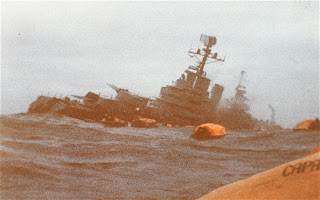 Largely missing from the mainstream media channels this one.  But then again it is Christmas and this story is still on the fringes.  As reported in today's DT, declassified papers as well as the memoirs of a former Intelligence officer David Thorp now state that according to Signals Intelligence the Argentine Vessel was heading towards the Falklands (and therefore UK forces) when it was sank by a British Submarine.  Previously it has been held by many and especially those on the left that it was not and that Thatcher was reckless in ordering its sinking.  That has now been confined to history as a myth and the likes of Tam Dalyell, the Argentine Government and even the BBC were all wrong.  That is all I need to say although I would like to wish all veterans of that conflict on both sides peace.  Margaret Thatcher and the UK were right throughout that conflict, a petty fascistic clique of militarists did not serve Argentina well however.
Posted by Paul at 05:19 No comments:

Voting for an open prison