Saudis hold 'Women in the workplace forum'- With no women present! 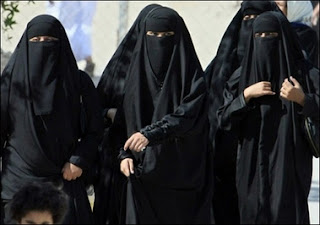 You really could not make this crap up but it is true. Okay so what you may ask? But as I reported on the piece about the King Fahad academy in London here the Saudis fund religious schools and Mosques extensively including in the UK. So if we are not seeing such cultural retardation here already it is only a matter of time. We have seen such nonsense before such as when the Saudi Human Rights Commission criticised western governments for infringing the human rights of Muslims in the west as they said here The link for the article concerning the female workplace forum is here :

Scholar lifts veil on sharia
May 11 2008 at 02:03PM
When clerics, ministers and businessmen gathered at a forum in Riyadh in April to discuss women in the workplace, there were no women in sight. Typically for Saudi Arabia, the women who took part were seated in a separate room so the men could only hear them. Such things are part and parcel of the complex system of social control maintained by clerics of Saudi Arabia's austere version of Sunni Islamic law, often termed Wahhabism. It is a system called into question by scholar Hatoon al-Fassi. In her study, Women In Pre-Islamic Arabia, the outspoken rights advocate argues women in the pre-Islamic period enjoyed considerable rights in the Nabataean state, an urban Arabian kingdom centred in modern Jordan, south Syria and north-west Saudi Arabia during the Roman empire.
DisplayAds('SquarLAV',12,139);

'father, husband, brother or son - to accompany women in public'Most controversially, Fassi says women in Nabataea - whose capital was the famous rose-red city of Petra in south Jordan, and which was at its height during the lifetime of Jesus Christ - enjoyed more freedom than in Saudi Arabia today because clerics have misunderstood the origins of Islamic law. She also suggests some Saudi restrictions on women may have their origins in Greco-Roman traditions. "One of the objectives of this book is to question the assumption of subordination of women in pre-Islamic Arabia," Fassi writes. "Most of the practices related to women's status are based on some local traditional practices that are not necessarily Islamic. Nor are they essentially Arabian."She argues that women in Nabataea were free to conduct legal contracts in their own name with no male guardian, unlike in Greek and Roman law, and in Saudi Arabia where the guardian is central to the clerics' idea of a moral public sphere. The Wahhabi interpretation of sharia requires a "muhrim" - father, husband, brother or son - to accompany women in public, allow them to travel and attest their legal contracts. United States-based Human Rights Watch attacked that system in a report in April as treating women as effectively legal minors. At last month's televised National Dialogue, clerics insisted women could work only in segregated female-only workspaces. Their opponents in government say these rules have kept unemployment among women at around 26 percent.
'Fassi's ideas reflect views often expressed by Arab liberals'Adaptation"I found that with Nabataean women the legal status and self representation was stronger and more evident than with Greek women who needed always a 'tutor', or representative, in order to conclude any contract," Fassi said in an interview. "An adaptation of Greek and Roman laws was inserted in Islamic law," she said, referring to guardianship. "I would insist that it is an ancient adaptation that (Muslim) scholars are not aware of, and they would really be shocked."The main schools of sharia were codified in the 9th century AD in territories where a ruling Arab elite mixed with non-Arab and non-Muslim populations in the aftermath of the Arab conquests and the rise of Islam in the 7th century AD.The main body of the law is derived mainly from oral traditions attributed to the Prophet Muhammad, and viewed by Islamic scholars as divine in origin. Scholars in the West have seen, in effect, a mix of Arabian, Jewish and Roman origins. "The argument about Greco-Roman law having influenced the sharia rules about women could have some basis if one thinks in terms of Middle Eastern adaptations, 'provincial versions' of Greco-Roman law," said Gerald Hawting, a historian of early Islam at the School of Oriental and African Studies in London. Fassi, he said, "is not likely to win many friends among the traditional ulama (scholars) by arguing that important elements of the sharia originate from human history and not from God".Fassi's ideas reflect views often expressed by Arab liberals - that restrictive traditions in the empires conquered by the Arabs found their way into Islam. Egyptian feminist Nawal al-Saadawi, for one, has often been attacked for saying as much. "The deterioration in women's status is clear. We now live the worst status imaginable as women," said Fawziya al-Oyouni, a women's rights activist who lobbies for women's right to drive. "There is no religious text that stipulates guardianship."Signs are that around 2 000 years ago things were not so strict. Using coins and inscriptions on Nabataean tombs and monuments in Greek and Semitic languages, Fassi surmises that women's independent status was linked to a rise in trade and political exchanges in the ancient world at the time. "There was a certain economic change in that period that allowed women to become stronger or more visible," she said. "I believe it was because of the economic absence of men. At the end of the first century BC the caravan trade became intensive, twice a year rather than once in the previous millennium." The last of the Middle East states to fall to direct Roman rule in AD106, the Nabataean confederation's power was based on desert trade routes from Yemen to Greece and Rome. Nabataean queens had coins struck in their name and showing their face, with light hair-covering veils. Today, Saudi clerics expound at length on television and in other forums on the complex rules over when women can and cannot reveal their faces. - Reuters
Posted by Paul at 02:46