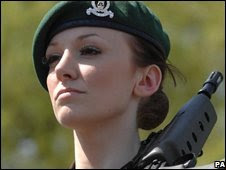 Either that or a sign of our times. Anyhow here is the story of a modern hero (heroine?) from the BBC, Katrina I salute you!

Katrina Hodge is a part-time model and a soldier in the British Army
A female soldier who once fought off a suspected Iraqi insurgent has won a place in the final of Miss England.
Katrina Hodge, 21, will participate in the contest in July, having already won the Miss Tunbridge Wells crown.
L/Cpl Hodge was nicknamed Combat Barbie in 2005 after being given a bravery commendation for saving the lives of members of her regiment in Iraq.
They were held at gunpoint when their vehicle overturned but L/Cpl Hodge punched the gunman and took his rifles.
She said: "I was in complete shock at first. The force of the accident caused our vehicle to roll over three times and threw us off guard.
"As I came round, the Iraqi suspect was standing over us with the rifles. I knew if I didn't act fast then our lives would be in danger.
"I punched him and the force startled him enough for me to retrieve the rifles from him."
Miss Hodge, a military clerk with The Adjutant General's Corps, will go on to appear at Miss World 2008 if she wins the English title.
"I was delighted to have been selected for the Miss England final and it is a great honour," she added.
"Being a part-time model and a serving soldier is certainly a world apart. I want to use this competition to highlight the work that the Army are doing and what they have done for this country."
She is currently serving at Frimley Park Hospital in Camberley and will take part in the Miss England national finals on Friday.
Posted by Paul at 04:15

Paul,
I saw that you linked to Bar Kochba and consider him a 'fellow conservative'. I know you are right wing, but is this really an individual you want to associate yourself with?

For starters he's affiliated with Kach, an illegal organization recognized as a terrorist group by the U.S and Israel. He considers Brauch Goldstein a hero and has also praised Rabin's murder. He's called for the murder of Ehud Olmert as well. He brags of having relatives who were in the terrorist group Irgun, an organization that killed British servicemen and tried to collaborate with the Nazis. He advocates a settlement were only Jews will have political rights, not only in Israel, but also in the West Bank and Gaza also. He is a follower of the aptly named Rabbi Kook who taught that the soul of anyone who is not a Jewish extremist is of equal value to an animal. He is also a follower of Rabbi Meir Kahane who was banned from politics in Israel for racism and whose Knesset speeches were boycotted by all of the other MKs, even the far right ones. I could on, but I think you get the picture. This is an extremist fanatic, an advocate of ethnic cleansing, a racist, and a fascist. He's as much of a lunatic as the most fanatical member of the BNC and not someone I would expect any thinking person to associate with.

YA, I will consider the information you have offered and review his position on my blog roll if necessary. I am a democrat and Libertarian and have no time for supremacist ideologies.