A Quick Portrayal of a Modern Hypocrite and Fool..Colonel Desmond Travers IDF

This is a quick article as I need to gear up for covering the pending election. Not that the election will change a single thing in Britain anyway. British Colonels and occasionally American ones have been occasionally portrayed in the media as blimp like figures. Often this is done for amusement. However that accolade now must surely belong to Desmond Travers of the IDF. No not that IDF this IDF the Irish Forces. So who is Desmond Travers? Well he is a former Senior Officer of the IDF and was one of the panelists that produced the Goldstone report for the UN. That is the report which accused both Hamas and Israel of war crimes during Operation Cast Lead. The Goldstone report is widely used to criticise Israel. In fact it has some authority in many people's eyes as it was produced by a UN body. Even though the body itself is a complete turkey which appointed Sudan as a member on May 4th 2004! Previous members have included Syria, Libya, Saudi Arabia and Cuba. You probably get the point. That was the esteemed body for which Travers worked.

So my concerns for Travers are? Well quite simply the man is not equal to the task of performing an investigation into human rights violations. He has serious baggage, it was his intent from the start to use the report as a means of attacking Israel. This man should not be trusted to run a bath let alone mount an investigation. Read the following report in the Jerusalem Post by Alan Dershowitz. The Goldstone report was never meant to be impartial. In fact it could not possibly have been. Travers would have seen to that himself. He wanted to use the report to attack Israel. Travers has also unsurprisingly made paranoid and anti-Semitic remarks about a 'Jewish lobby'. For proof of that and a video of the man displaying his limited grasp of debating skills look at this piece by my friend Chas Newkey-Burden. Note how Travers evades the question. Also his completely contradicts himself saying that remarks about mosques storing munitions, can only be made if supported by forensic evidence. He states assuredly that no mosque did store munitions in Gaza, yet he he conducted no forensic investigation himself. He then theorises that munitions would not ever be stored in a place of worship, as his ancestors had been insurgents during the Irish war of independence. His ancestors had not done so between 1919- 1921 so therefore Hamas would never do so in 2009! What fatuous nonsense! The video is below:

Desmond Travers is a hypocrite, a political actor and not an investigator and an utterly disingenuous fool. You don't like me calling you that Des? Tough plenty of other people are and you can always sue me. Only I'll use your own words as evidence for this claim.


Full text on Travers in the Jerusalem Post below:


When Irish Colonel Desmond Travers eagerly accepted an appointment to the Goldstone Commission, he was hell-bent on revenge against Israel based on paranoid fantasies and hard left anti-Israel propaganda. He actually believed, as he put it in a recent interview, that "so many Irish soldiers had been killed by Israelis," with "a significant number who were taken out deliberately and shot (in southern Lebanon.)" This is of course complete and utter fantasy, but it was obviously part of Col. Travers' bigoted reality.

Travers came to the job having already made up his mind not to believe anything Israel said and to accept everything Hamas put forward. For example, Israel produced hard photographic evidence that Gaza mosques were used to store rockets and other weapons. Other photographs, taken by journalists, also proved what everybody now acknowledges to be true: namely that Hamas, as its leaders frequently boasted, routinely use mosques as military munitions depots. When confronted with this evidence, Travers said, "I don't believe the photographs." Of course not; they don't comport with his politically correct and ideologically skewed world-view. This is what he had previously said about why he didn't believe that Hamas used the mosques to store weapons:


We also found no evidence that mosques were used to store munitions. Those charges reflect Western perceptions in some quarters that Islam is a violent religion. ...If I were a Hamas operative the last place I'd store munitions would be in a mosque. It's not secure, is very visible, and would probably be pre-targeted by Israeli surveillance. There are a [sic] many better places to store munitions."


But that is exactly what Hamas did, despite Travers' insistence on paraphrasing Groucho Marx's famous quip, "Who are you going to believe? Me, or your lying eyes?"

Most disturbing, however, was Travers' categorical rejection of Israel's claim that it attacked Gaza only after enduring thousands of anti-personnel rockets intended to target Israeli civilians, mainly schoolchildren. In fact, Hamas rockets hit several schools, though fortunately the teachers had dismissed the students just before the rockets would have killed dozens, perhaps hundreds, of them.

This is what Travers said about Hamas rockets:


...the number of rockets that had been fired into Israel in the month preceding their operations was something like two. The Hamas rockets had ceased being fired into Israel and not only that but Hamas sought a continuation of the cease-fire. Two had been fired from Gaza, but they are likely to have been fired by dissident groups, [i.e. groups that were violating a Hamas order not to fire rockets]." (emphasis added).

Again, Travers' rendition defies the historical record and tells us more about Travers than it does about what actually provoked Israel into finally taking action to protect some million civilians in range of Hamas' rockets. In fact Israel complied with the cease-fire, under the terms of which Israel reserved the right to engage in self-defense actions such as attacking terrorists who were in the process of firing rockets at its civilians.

Just before the hostilities began, Israel offered Hamas both a carrot and a stick: it reopened a checkpoint to allow humanitarian aid to enter Gaza. It had closed the point of entry after the checkpoint was targeted by Gazan rockets. Israel's prime minister, Ehud Olmert, also issued a stern, final warning to Hamas that unless it stopped the rockets, there would be a full-scale military response.

This is the way Reuters reported it:


Israel reopened border crossings with the Gaza Strip on Friday, a day after Prime Minister Ehud Olmert warned militants there to stop firing rockets or they would pay a heavy price. Despite the movement of relief supplies, militants fired about a dozen rockets and mortar shafts from Gaza at Israel on Friday. One accidentally struck a house in Gaza, killing two Palestinian sisters, ages 5 and 13." (emphasis added)


Despite the opening of the crossings, the Hamas rockets continued - not none, not "something like two," but many - and Israel kept its word, implementing a targeted air attack against Hamas facilities and combatants.

Not surprisingly, Travers said that he "rejected ... entirely" Israel's claim that its "attack on Gaza was based on self-defense." Instead, he compared Israel's attack on Hamas to the unprovoked Nazi bombing of "Guirnica."

Travers has repeatedly claimed that "no substantive critique of the [Goldstone] report has been received." This is an out-and-out lie. I have read dozens of substantive critiques, and have written a 49-page one myself. The truth is that Travers has studiously ignored and refused to respond to these critiques. And of course he blames everything on "Jewish lobbyists."

Nor was Travers the only member of the commission with predetermined views and an anti-Israel agenda. Christine Chinken had already declared Israel guilty of war crimes before seeing any evidence. Hina Jilani had also condemned Israel before her appointment to the group, and then said that it would be "very cruel to not give credence to [the] voices" of the victims, apparently without regard to whether they were telling the truth. And then there is Richard Goldstone, who told friends that he too took the job with an agenda, which he says was to help Israel! Why any reasonable person would pay any attention to a report written by four people who had prejudged the evidence and came to their jobs with agendas and biases is beyond comprehension.
Posted by Paul at 03:13 20 comments:

No reporting from Afghanistan during the election. 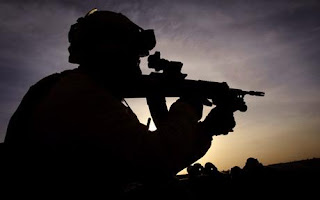 Expect to see less of this during the election.
Even though reporting during the 1945 election
was never suspended.

Reporters are facing a 'gag' on reporting from Afghanistan in the run up to the election. Is anyone surprised? I guess not but at least Gordy managed to get his own piece of electioneering from Afghanistan done last week. That is of course before the ban will come into effect. A further example of powerful, corrupt government suiting it's own ends. Never mind the troops, I wonder if the next of kin of any casualties that occur during the period of this gag will have to wait for news. I mean will the MOD wait until after the election and then tell the families their loved ones have died, days or weeks later. It would certainly be expedient for this government to do so and in keeping with the spirit of this unnecessary restriction on press freedom.

In the words of Colonel Douglas Young Chairman of the British Armed Forces Federation:

“It didn’t happen in 1945 - there was no question of limiting reporting at that time simply because an election was happening and I don’t see why there should be any questions of that now. Are we to stop operations during this period? Obviously not, and if operations are in process they should be reported upon in the normal way.

“It is ridiculous to expect the forces to be hiding away just because there’s a general election.”
Posted by Paul at 01:48 3 comments: