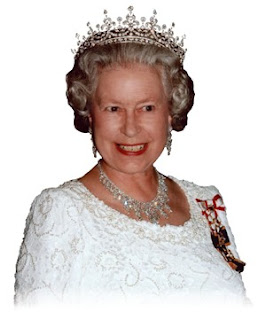 Well whether you are a republican or not I would have thought that the UN Human Rights Council has more important matters to address but apparentley not. I mean genocide in Darfur? Wars in Somalia, Iraq and torture in Saudi? Nope far more pressing matters need to be addressed according to the Telegraph here . What is strange is that this human rights Council includes that 'kernel of evil' Saudi Arabia and other paragons of virtue such as Cuba and Syria. Here is the article anyway:

Britain should get rid of the monarchy, says UN
By Nick Allen
Last Updated: 3:01PM BST 13/06/2008
A United Nations report says Britain should abolish its monarchy.
The UN Human Rights Council said the UK must "consider holding a referendum on the desirability or otherwise of a written constitution, preferably republican".
The council has 29 members including Saudi Arabia, Cuba and Sri Lanka.
It was the Sri Lankan envoy who raised concerns over the British monarchy.
Article continues
advertisement
dcmaxversion = 9
dcminversion = 6
Do
On Error Resume Next
plugin = (IsObject(CreateObject("ShockwaveFlash.ShockwaveFlash." & dcmaxversion & "")))
If plugin = true Then Exit Do
dcmaxversion = dcmaxversion - 1
Loop While dcmaxversion >= dcminversion

The resulting report said Britain should have a referendum on the monarchy and the need for a written constitution with a bill of rights.
The monarchy costs each adult in Britain around 62p a year but even groups representing taxpayers said there was no case for getting rid of it.
Matthew Elliott, chief executive of the TaxPayers' Alliance, said: "With so many human rights abuses around the world the UN should be busy reporting on issues of starvation, execution and the denial of the vote to huge numbers of people around the world.
"Saudi Arabia and Cuba should pay a little more attention to their own human rights record."
The UN report was also critical of the UK's treatment of immigrants from Sudan.
Syrian representatives accused the UK of discriminating against Muslims and Iran complained about the UK's record on tackling sexual discrimination.
A royal source said: "People here certainly haven't detected any appetite for a referendum. The Queen is a focus for national unity, identity and pride."
Posted by Paul at 10:18 2 comments: 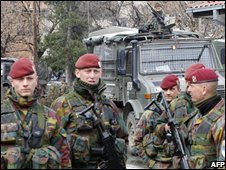 Well why is this idea so naff? Two reasons it will cost taxpayers a fortune, secondly it will never be an Army as most European countries will not fight anyway. Look at the weak willed German commitment to NATO, that is so apparent in Afghanistan for instance. In Afghanistan German helicopters will not fly after 5pm (gives the Taleban the night off) and their troops will only fire in self defence. Thus Taleban leaders in their area have relative immunity. In Afghanistan the burden is borne by UK, US and Canadian troops. Anyway the story from the BBC is here.

Call for EU to build its own army
By Mark Mardell Europe Editor, BBC News

European soldiers already act under the UN banner in Kosovo
An influential Polish member of the European parliament has called for the EU to develop "hard power" and spend more money to build a European army.
Foreign affairs committee chairman Jacek Saryusz-Wolski also wants the European parliament to have the final say on deployments under the EU flag.
The French have said beefing up the EU's military capability will be a key part of their six-month presidency.
The BBC has been told their plans also include a new EU military headquarters.
Other items on the French list of proposals involve calling upon all EU countries to increase spending on defence to meet a new target of perhaps 6% of Gross Domestic Product.
More aircraft
France's leadership of the EU will also include a push for the creation of more rapid reaction forces to enable Europe to collectively undertake three simultaneous missions.
They also want more helicopters and aircraft to be made available for missions.
The big problem is finding countries that want to contribute... troops and helicopters to real missions
Mark Mardell's blog
The EU will not officially comment until the proposals are unveiled by French President Sarkozy in two weeks' time.
The head of the German army, Gen Wolfgang Schneiderhan, told the BBC that Europe needs to be able to react to crises.
"Working together with Nato we can improve the ability of both organisations to tackle the threats that face our world," he said.
The plans are likely to prove controversial in many countries, including Britain, where there is reluctance towards any move to a European army.
In Ireland there are concerns about neutrality, while in Germany there are worries about any policy that could go beyond a peacekeeping role.

Further background and comment on this story can be found on the BBC journalist Mark Mardells blog.
Posted by Paul at 04:18 2 comments: