A sorry tale of exploitation and immorality now fully exposed... 'Alfie' is not a Dad after all. 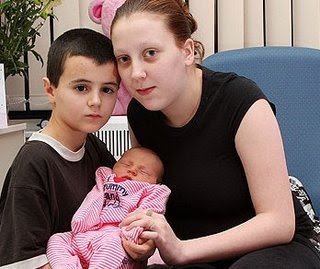 It turns out young Alfie may have been led down the garden path.


I remember the story of teenage 'dad' Alfie Pattern when it was originally disclosed by the Sun in February. At the time I was shocked and a more than a little peeved to see the good use my tax money was being put to. However it was exploitation, a cynical attempt by the Sun to exploit the sorry antics of a very young and surely feckless couple. The story has bow been updated by the Mirror. Now it seems that young Alfie is not the father and the girl Chantelle has perhaps spun him (and the Sun) along. Is it fair to say she is a slapper? Certainly yes but the real culprits are her mother and the media who manipulated these muppets. See the full story below. A few questions need to be asked:

1. How much did the Sun pay to the 'parents' of Alfie and Chantelle for this story.

2. Why did the Sun report the story as fact in spite of the fact that 4' tall Alfie is clearly pre-pubescent and therefore unlikely to be a father.

3. Alfie in particular has been through the mill during this whole affair and was exploited by the Sun and utterly greedy adults who should have been concerned what their children were up to; not making a quick buck out of it.

Chantelle the 'mother' is from a family of welfare dependents as to an extent is Alfie. This case like the Karen Matthews case displays the utter moral fecklessness that excessive state nannying produces. A fecklessness that as taxpayers we all pay for. I am a libertarian and the last person to lecture people on sexual morality. My attitude is that what consenting adults get up to is their business as long as no serious harm is caused. However in a case like this involving children the state needs to come down hard and prosecute those involved starting with the guardians. Instead the state funds this behaviour through excessive welfare.

DNA tests show boy-dad Alfie Patten is NOT the daddy

The schoolboy alleged to have become a dad aged 12 is not the baby’s father, the Mirror can reveal.
Alfie Patten, now 13, had a £300 DNA test after half a dozen boys claimed to have slept with schoolgirl pal Chantelle Stedman, 15.
It proved the 4ft-tall pupil was not the father of her seven-week-old girl Maisie Roxanne.
The result will be a blow to Alfie who was “devastated” by the boys’ claims and “adored” Maisie.
He was convinced he was the dad after a single night of unprotected sex with Chantelle.
Before he took the test, he said: “I didn’t know about DNA tests before but mum explained it’s when they do a swab in your mouth and it tells if you’re the dad. So if I have it, they can all shut up.”
His mum Nicole, 43, added at the time: “It had not even crossed Alfie’s mind whether Chantelle had not been faithful to him. He’s absolutely devastated that these lads say they slept with her.”
Chantelle became pregnant aged 14 after she “forgot to take” her contraceptive pill last May.
At the time, she claimed: “Alfie’s the only boy I’ve been with.”


Alfie insisted: “I am the only boyfriend Chantelle’s had and we’ve been together two years. I must be the dad. When she found out she was having a baby, I asked her, ‘Am I the dad?’ and she went, ‘Yeah’, so I believe her.”
Last month it was claimed Alfie had been the victim of a cruel con.
Chantelle told her half-sister Jodie O’Neill, 17, the father could have been one of a number of boys she slept with at her parents’ home in Eastbourne, East Sussex.
She said her mum Penny, 38, ordered her to keep saying she had been a virgin when she slept with Alfie, from Hailsham.
The baby scandal began when Alfie and his dad Dennis, 45, gave an interview to the press days after Maisie was born last month.
A succession of politicians, including Tory leader David Cameron, bemoaned the nation’s declining moral standards.
Mr Cameron said at the time: “I hope somehow they grow up into responsible parents but parenthood is just not something they should be thinking about.”
Dad-of-ten Dennis regularly spoke on his son’s behalf. After Maisie’s birth he said: “He hasn’t a clue what a baby means and can’t explain how he feels. When I spoke to him he started crying.
“He said it was the first time he’d had sex, he didn’t know what he was doing or the complications that could come. I’ll talk to him again and it’ll be the birds and bees talk.”
Posted by Paul at 10:02 No comments: 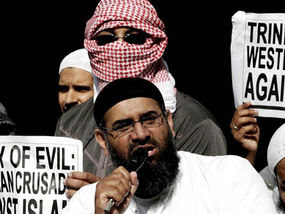 This is another gem from Choudhary. Interestingly though in an example of naivety another blogger described Choudhary's group of Muslims who greeted British Soldiers with placards saying 'Anglians go to hell' as anti-war protesters. The poster went on to say that these individuals were right to protest as 'Between 601,027 and 1 million people have died since March 2003 as a result of the invasion of Iraq.' Leaving aside the fact that the statistics are incorrect, a better question would be 'who did most of the killing'? Here is the problem therefore with describing Choudhary's motley band of Jihadists as 'anti war'. They are not, they are in fact pro-war, pro-Jihad. Look at the article below for just one example of Choudhary's views. Also bear in mind that most of the killing in Iraq was done by Jihadists, the Al Qaeda movement and Shia militants aligned with and sponsored by Iran. It becomes clear that these protestors are far from linking their arms and singing 'we will overcome'. They are in fact supporters of extreme acts of violence which have killed many Iraqis. It was not American troops who ploughed suicide car bombs into Shia pilgrims in Iraq. Never mind of course Choudhary et al they have a right to peacefully protest in the UK, I just wish that Geert Wilders had a right to come into Britain for a peaceful debate as well. Full text of Choudhary’s latest below:
‘MAKE EVERY WOMAN WEAR A BURKHA’

Anjem Choudary
Saturday March 14,2009
By Martyn Brown
A MUSLIM hate preacher who demanded that all British women be forced to wear burkhas faced a storm of outrage last night.
Firebrand Anjem Choudary said he wanted every woman to be covered by a full-length cloak in his vision of Britain under Sharia law.The lawyer, who praised the Mumbai terror attacks, also said he wanted to see the “flag of Allah” flying over Downing Street, adulterers stoned to death and drunks whipped.Choudary, 41, sparked fury this week when he branded British soldiers “cowards” and was behind a sickening anti-war protest against troops who were arriving home from Iraq to a heroic welcome.Last night politicians and fellow Muslims condemned his comments while some called for him to leave the country.Choudary, the leader of Ahlus Sunnah wal Jamaah, a group set up following the banning of extremist sect al-Muhajiroun, led by now-exiled preacher Omar Bakri Mohammed, said he offered “a pure Islamic state with Sharia law in Britain”. He said: “Every woman, whether Muslim or non-Muslim, would have to wear a traditional burkha and covereverything apart from her face and hands in public.”“In matters to do with the judicial system and the penal code, one male witness is sufficient to counter the testimony of two females. People who commit adultery would be stoned to death.”Despite becoming possibly the most despised man in Britain with his fanatical views, he remained unrepentant.“That’s a badge I would wear with pride,” he said. “It’s inevitable that when you offer an alternative morality and way of life, many people will hate you for it.”


He said Britons “with their alcohol, gambling, prostitution and pornography” live “like animals in a jungle” and added that “anyone who becomes intoxicated by alcohol would be given 40 lashes in public”. He claimed last month on his website Islam4UK that alcohol was “the root of all evil”. Last night his comments were met with outrage. Conservative MP and ex-Army officer Patrick Mercer said: “If anyone thinks that those views are a step forward in society they are seriously deluded. They are repellent and repulsive. I strongly believe the Home Secretary should seriously think about this man’s right to live in Britain.”Tory MP Philip Davies said: “The man is an idiot who does more to incite racial tensions than anyone else. “If he wants Britain to live under Sharia law then why doesn’t he go to another country?” Choudary was also attacked by moderate Muslims. Inayat Bunglawala, of the Muslim Council of Britain, said: “Choudary and his tiny group of hooligans are about as representative of British Muslim opinion as the BNP is of ordinary British public opinion. “If their inflammatory remarks ever cross the boundary into actual incitement to violence then they should be prosecuted.”Iraqi war victim Ali Abbas, 18, who came to the UK after losing both arms and his family in the conflict, said: “Where was this Muslim preacher when I and countless others were lying in hospital beds not knowing if we were going to die?”
Posted by Paul at 04:42 6 comments: